The first COMMON SPACES lab took place in Amman, at city that now looks like a patchwork rug of diverse communities reaching deep into the countryside. It has been repeatedly populated by waves of migration since 1948. While the architectural evidence of an Arab modernity has disappeared under numerous layers of densified and commercialized city uses, official urban planning is trying to gain a profile with major projects that are supposed to play a role on the international stage: for example, a popular modernist factory was destroyed in order to realize Zaha Hadid’s rather generic design of an opera house. When the project was then abandoned during the financial crisis, the ruins remained  an opportunity for the city politicians’ beautification mission: a large informal market  – well placed between hotels, residential areas and long-distance
bus routes – was pressed into smaller surfaces at an inopportune peripheral site. The defiant merchants are now under stricter observation – they have been placed closer to the police.
First Intervention : COMMON SPACES took these dynamics as the starting point in order to initiate the “OPERA BIBALASH” („opera for free“) at the market with the merchants. An opera that took place with all of the active market’s sounds, actions and settings. The visitors from this mostly socially segregated city were pleasantly surprised as their expectations were irritated.
Second intervention :“Do you imagine things?”
​​​​​​​A video documenting a simple performance. The video connects two spaces, the old and the new market location. “Do you imagine things?” is a performance that took place in the old Abdali Market location which is now an abandoned space used as a parking lot, and marketed by the municipality as “ An Under Rehabilitation Project”, suspended in an inbetween space. The video was screened on a borrowed tv screen in the new market location in Ras El Ein in a shop selling electrical used appliances.
The performance is the simple act of walking in the imagined market that stood here once, following routes that are no longer relevant in the empty space between the cars guided by the grid of  the fading blue lines that once marked the spots of the stands that have been relocated.
The imagined and the real, the past and the present, the present and the absent all intertwine into one.
The History of the space:
The Abdali flea market, is an informal accidental flea market in what used to be the ‘Abdali Bus terminal’
In an attempt to occupy the downtown of the city and transform the whole urban public scene into a business and tourism spectacles, several attempt in (2007/2009 ) of cleansing the city had taken place. Many of the main public transport hubs had been relocated to the peripheries of the city. One of them was the main Abdali Bus terminal which used to connect the country and beyond; Damascus and Baghdad once.
A flea market used to occupy the space on weekends and public holidays, and after the relocation of the buses in 2009 it occupied all of the space and had become one of the maon public spaces in the city of Amman, where all classes of the city meet.
In 2012 the Abdali market was targeted next in the goverment's attempt for beautification of the city and hiding the informal accidentail stories of its streets.  GAM (Greater Amman Municipalty) announced the relocation of the Market to "Ras Al Ein" ( or the head of the water spring).
Ras El Ein location; an empty lot where ‘The Tobacco Factory’ (or ‘Masna’ al-Dukhan’, Arabic: the Factory of Smoke), one of Amman’s old industrial landmarks used to stand, the abandonded factory was demolished to clear the space for the Opera Project on July 2008. “Darat King Abdallah II” opera house; a huge ambitious project that was proposed in 2008 and commissioned to the star architect Zaha Hadid. Architecturally its an icon of power and money inserted in the modest landscape of Amman sitting on the periphery between East (the less privileged part of Amman) and West Amman (the more polished side of the city), as part of this other huge Utopian project to connect both sides.
The project like many others got suspended after the new economic conditions, and other issues in GAM and the empty lot stood still, hovering in the valley.
The empty lot was cleaned, stands loactions were marked on the floor, signage went up on the old factory concrete fence ( the only part that still exists from that monument) and the spacee is ready to host the new market, but this time in a more controlled even gated way; the buyers and sellers will be out of site, contained inside the concrete fence, the informal was eliminated, to cater for the elite that will be visiting the New Downtown.
Now what occupies the empty lot in Abdali is a sign that says, " Abdali Saha, under development" and functioning as a huge car parking lot for the area. 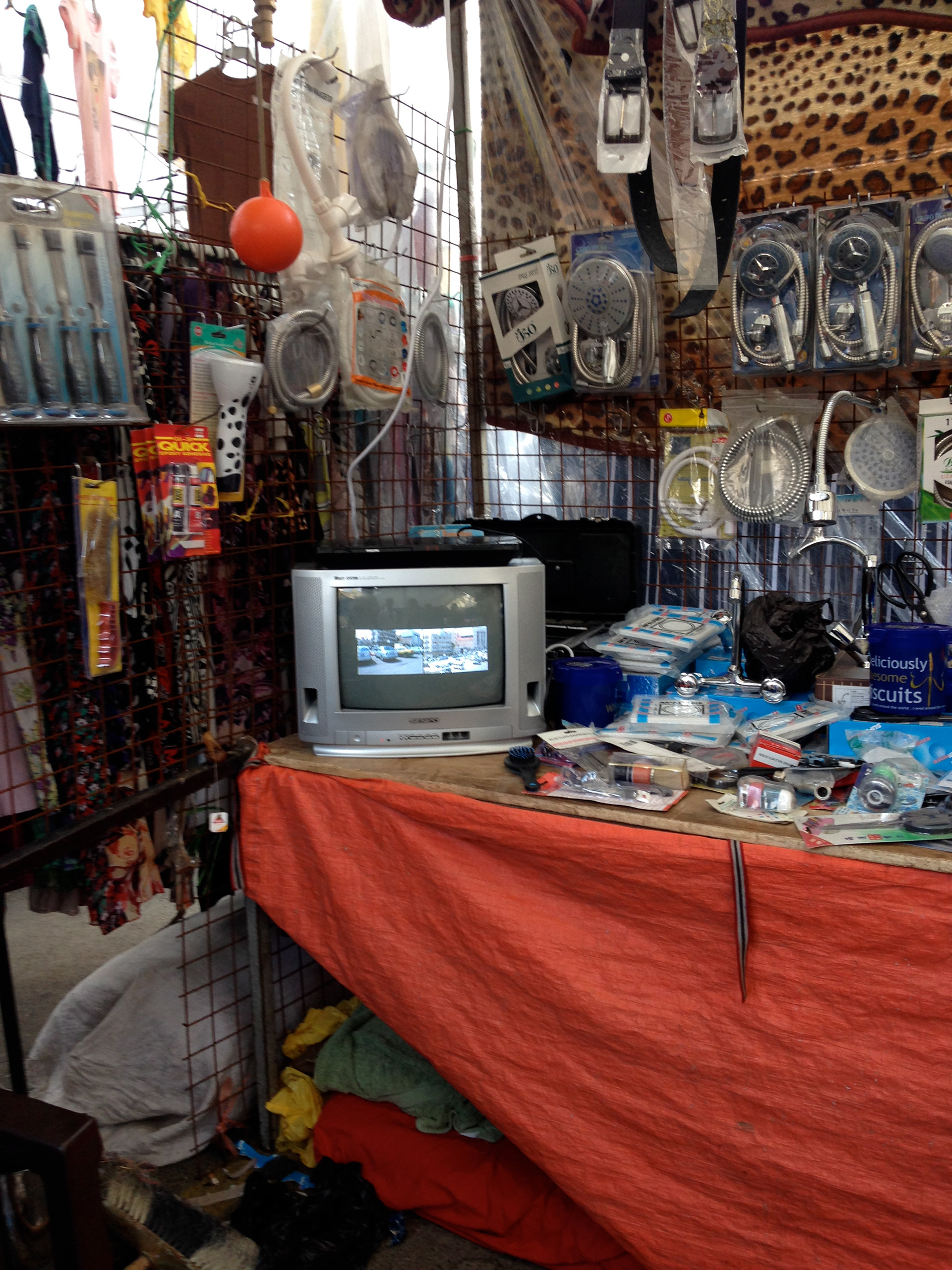 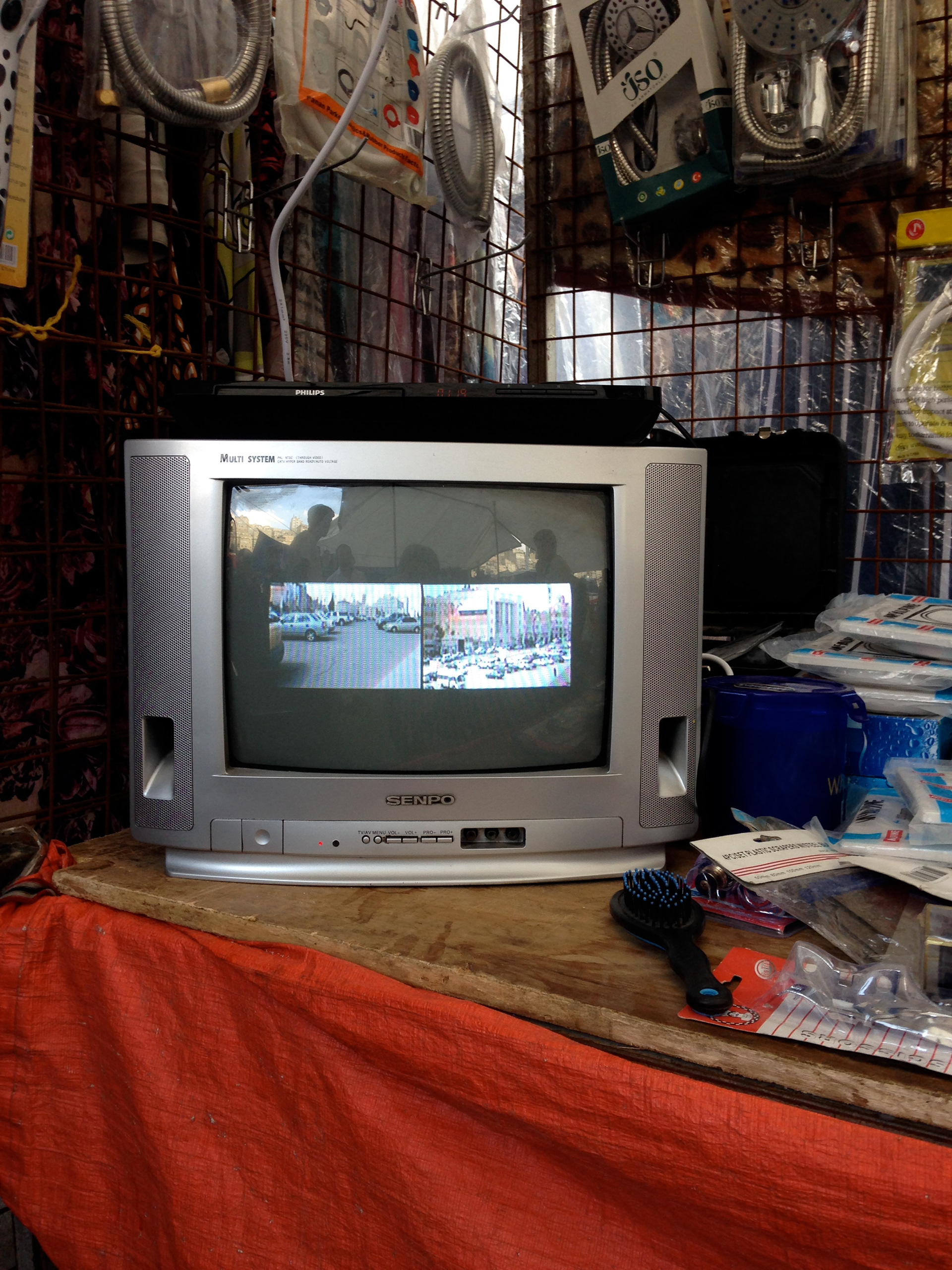 Video Installation in one of the stalls in the Friday Market downtown of Amman
"Are you Imaging things" video 3:37  on tv monitor
The Third intervention : is a pop up piece of a museum space; a found object, a ‘glass display stand ' showcasing old local news papers showing ads of some of the cigarettes brands manufactured in the demolished cigarette factory that once stood on this land; a symbol and monument of the industrial era of Amman,  The factory was demolished in 2008 for a proposed ‘Opera House’ designed by the star architect Zaha Hadid that never saw the light. This is an part of the imagined building that wasnt built, the history or the museum of the Opera House. 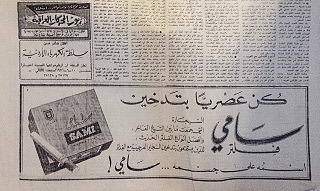 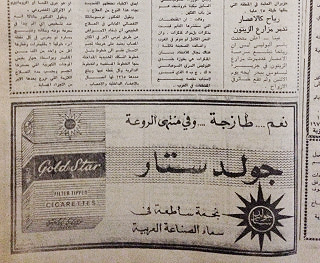 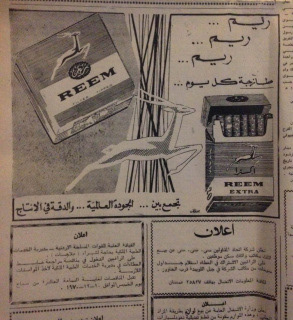 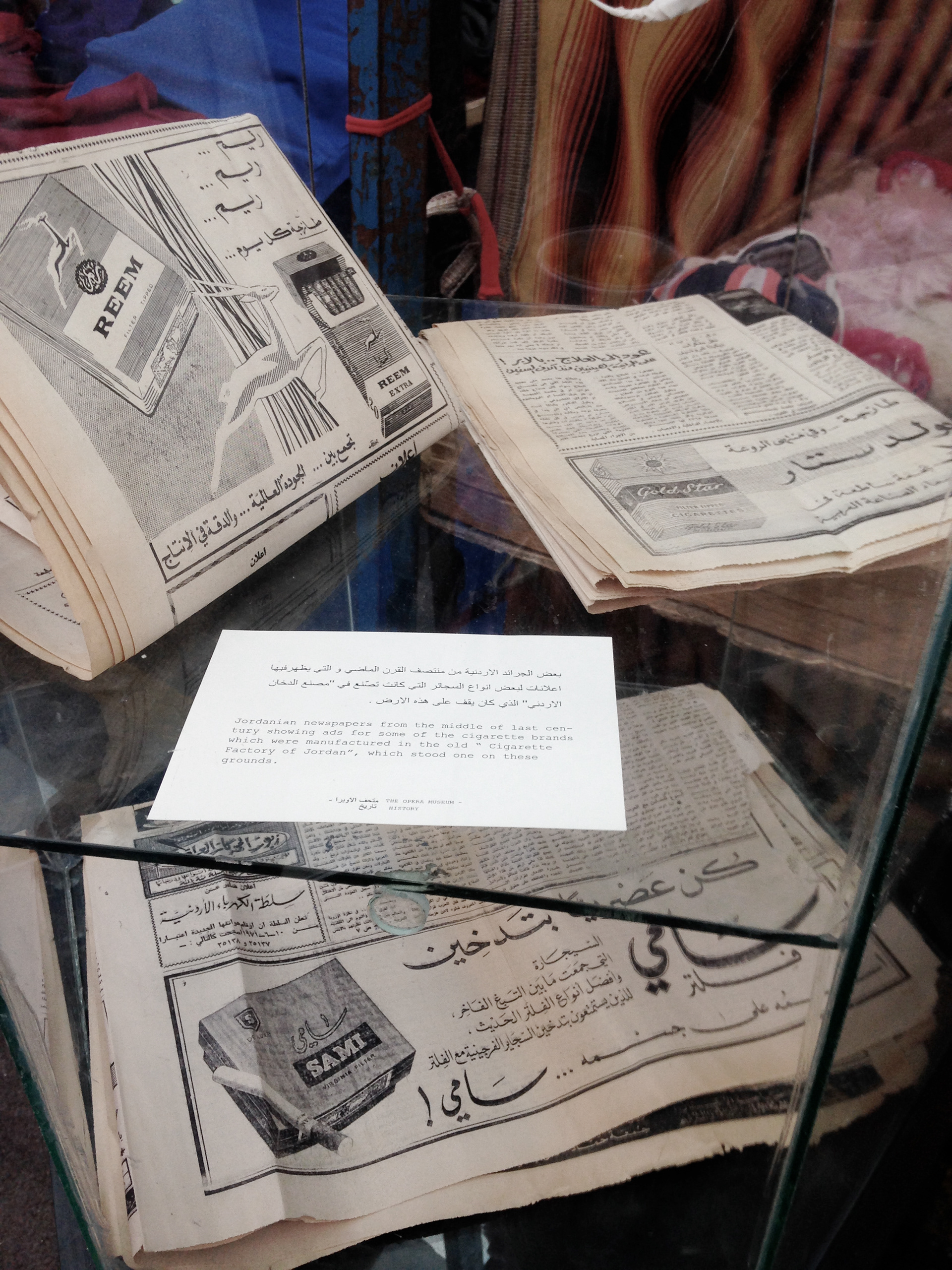 The text in the case reads: "Jordanian Newpapers from the middle of the last century showing advertisements for some of the cigarettes local brands which were manufactured in the old "Cigarette Factory  of Jordan", which stood once on these grounds" 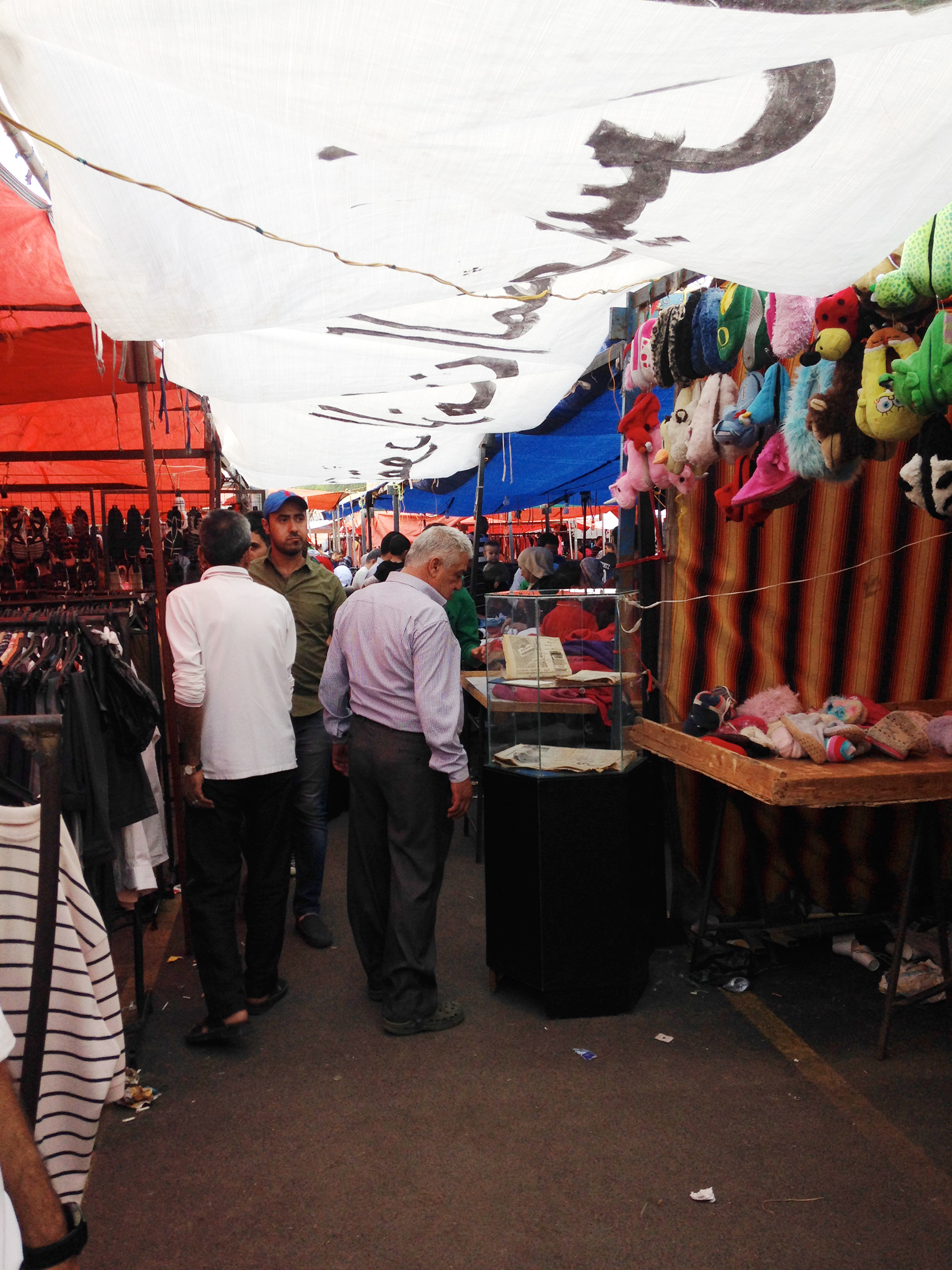 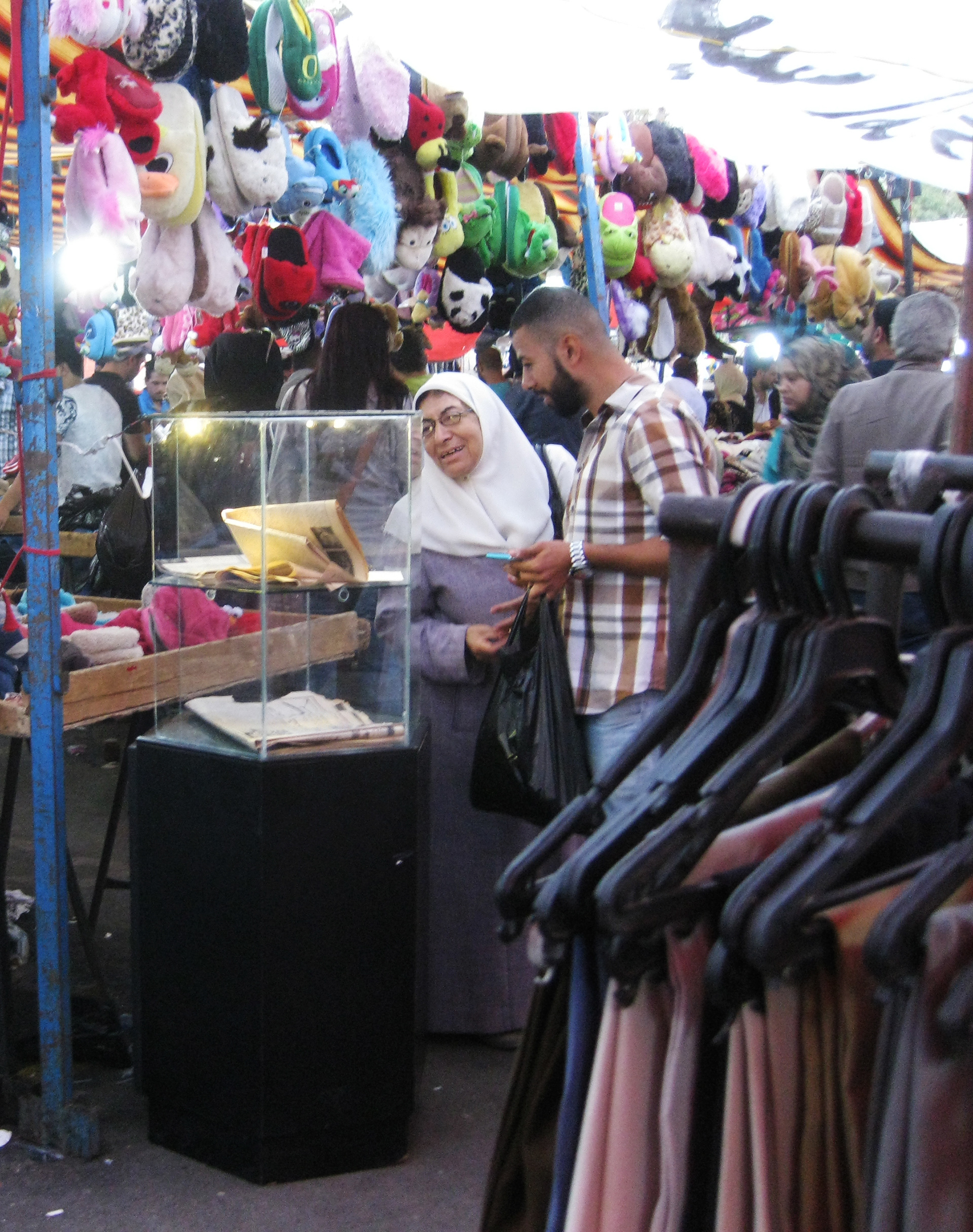